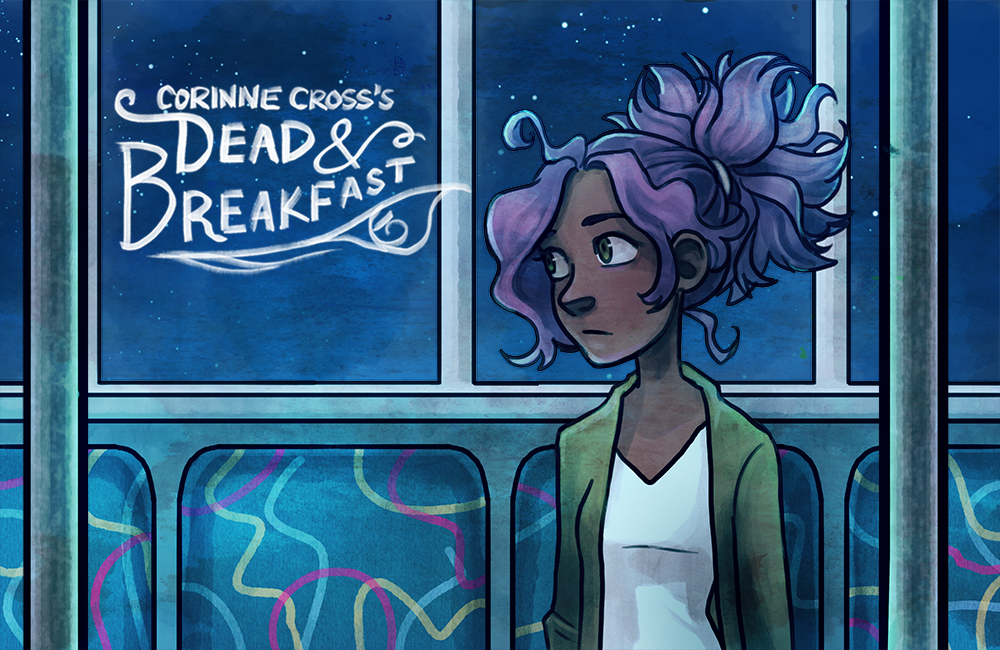 Each of this year’s IGMC judges started with about 70 games. We began by “screening” each of them, which meant playing through about 10 minutes to make sure the game wasn’t totally bugged or painfully awful. Obviously, Corinne Cross’s Dead and Breakfast passed the screening phase easily and I looked forward to playing the game in full (I went through my entries in alphabetical order).  When I did get to experience the entire game, I thought to myself, “I may have just played the winner.”

Several weeks and seven other judges later, that prediction was accurate. This enchanting adventure game follows the title character as she gets roped into house-sitting for a friend of her mother. Corinne quickly gets more than she bargained for when it’s revealed the house is haunted by numerous ghosts. These aren’t scary ghosts, just confused people trying to make sense of their new reality. The player interacts with them on a daily basis while growing and selling flowers to earn money and purchase food so the spirits can have their breakfast.

The game is filled with stunning custom artwork, but don’t assume that it only won because it’s so pretty. This game has the best story and characterization out of any games I played for the contest and the adventure gameplay is simple but fun. It embodied the theme of “growth” in two ways – the literal growing of flowers and fully realized character growth for most of the cast. 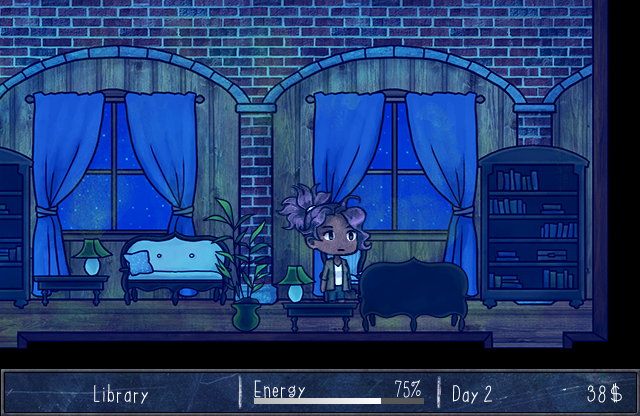 So many ghosts and not a jump scare in sight!

I spoke with the creator, Cecilia Bishton of Bad Chalk Entertainment, to learn more about the game.

Some part of me still thinks I must be dreaming! It’s hard to believe, especially considering how fierce the competition was. It’s a huge honor and incredibly validating after a month of hard work. Everyone has been so kind, and it makes me really happy that people seem to be enjoying my game. I couldn’t be more thrilled about my IGMC experience.

This game is full of custom artwork and is fairly long for a contest entry. How did you manage to finish it all in just a month?

It was intense, especially considering that I found out about the contest a week into the development period. Any free moment I had from school and homework, I would be working on it. I kept notes, drafted schedules, and made daily to-do lists. I did the design and writing first, then spent the rest of the time switching between art, implementation, and testing.

It was hard, but game development is what I love. I didn’t mind the late nights and the hours spent at the computer in the slightest. I was busy, but I was having a blast.

Nothing about the visuals suggests that this is an RPG Maker game, but it is. Did you consider another engine at any point?

I knew right away that I would be using RPG Maker. Especially because I was coming into the contest late, being able to develop quickly was crucial. My previous experience with RPG Maker definitely helped me to meet the deadline. Besides, I had always wanted to try making a painterly side-scrolling game in RPG Maker, so this competition was the perfect opportunity!

Were there any other RPG Maker games that inspired your approach?

Not in particular, although I don’t believe I’m the first to try this side-scrolling style. I wanted the game to be illustrative and have watercolor textures, so having larger characters and maps was conducive to that.

Was there anything you wanted to include in the game but couldn’t because of the deadline?

Definitely! The interior of the greengrocer and the florist had to be cut out, along with their respective characters. The implementation of the multiple endings was definitely rushed, as I was coming up on the deadline fast. I would have liked to put in more details and general polish too.

For the most part, I was able to get everything I wanted into the game. Making decisions about what gets cut is just a part of working with a hard deadline.

The character designs, particularly Corinne and her purple hair, are striking. How did you come up with the look for the characters?

I designed their personalities first and let them inform their appearances. I’ve always been a fan of unrealistic hair colors. It adds more color into the world and creates a lot of possibilities for character design. It was important for me that the characters had variety to them—I really liked the idea of a group of unlikely friends brought together by this B&B. 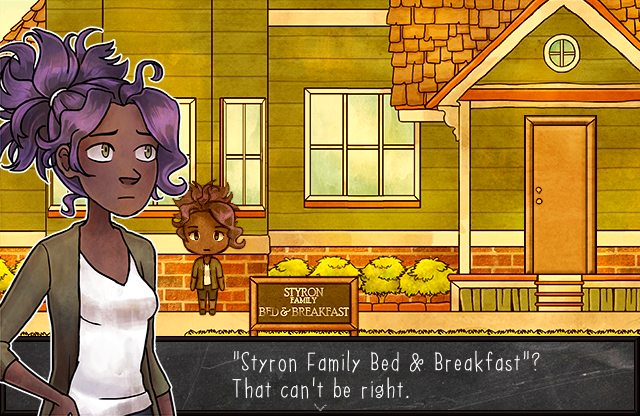 Yeah, this game’s not named after them!

The writing in this game has a strong emotional undercurrent. At times it feels almost personal. I doubt you ever ran a haunted bed and breakfast, but were there any personal experiences that inspired this story?

Corinne’s adventures aren’t based on any of my personal experiences (no haunted bed and breakfasts in my past), but I think you can see a lot of my personal philosophies on life in there—about pursuing your passions, making the most of your time, and being good to your loved ones.

Growing and selling flowers is a key part of the game, but you also have the option of growing flowers in the nearby cemetery. What is the significance of this subplot? Does it tie into the game’s story as a whole?

Paying your respects at the graves can help you earn the good endings with their respective ghosts. More importantly, I wanted them to serve as a reminder that the guests of the B&B are, in fact, dead.

Have you had a chance to play other IGMC entries during the judging period?  If so, which ones stood out to you?

Unfortunately, I was too busy with school to try out many of the other entries! I enjoyed Free Spirits, even though I was terrible at the battle system. The art was fantastic and the 20’s setting was great. Our games had similar concepts (trying to get ghosts to move on to the next plane), but completely different approaches—and I think that’s really cool.

What advice do you have for someone trying to make a memorable game in a short time?

Make the game that you want to make. One of the best things about indie game development is the freedom we have when making our games. Find out what makes you passionate about game development and pursue that, whether it’s characters and story or gameplay and mechanics.

When it comes to working with a short amount of time: find out what methods work for you when it comes to keeping yourself on task. For me, it’s lists. A lot of lists. And always keep your scope in check! I think it’s better to make a small game well than a big game badly.

What’s next for Bad Chalk Entertainment?

Since the contest ended, I’ve been working on an updated version of Corinne Cross’s Dead & Breakfast. I’m going back and adding the things I had to cut because of the deadline, improving the writing and art, and adding more content and detail in general.

Afterwards, I’ll go back to working on GORGE, the project I was working on when I heard about the IGMC. It’s a pixel horror game about two girls who are trapped in a dark version of their hometown where everything revolves around food.

(Yes, somehow both of my games are about food and supernatural spookiness.)

Finally, the most important question…where is the recipe for the scrambled eggs? I couldn’t find it anywhere!

Hahaha! This is a good chance for me to officially apologize for making the scrambled eggs so hard to find. Alex is the one who has the recipe. She’s hiding in the downstairs bathroom on night 4. I thought people would note her absence and go looking for her! I’ll make it a little easier in the updated version.

I wanted to say one last big thank you to the IGMC judges/organizers, and to everyone who supported my game! Thank you!

Next post: A Conversation with the Creators of Nanuleu, the IGMC Second Place Winner