Talking with the Creator of Symbiote, the IGMC Third Place Winner 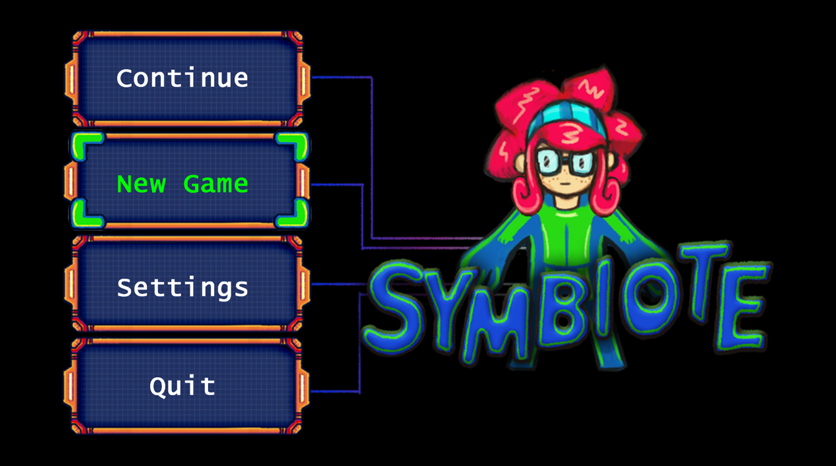 It’s not a good idea to judge a book by its cover. Every so often, however, the cover is accurate. I didn’t end up judging Symbiote until fairly late in the contest but when I took a look at the screenshots, I knew this game was going to be good. Sure enough, Symbiote was one of the entries that felt the most like a true complete game, a beautifully-realized platformer in the “Metroidvania” style with excellent character animation and fun level design.

Following a disastrous space expedition, a young girl named Aubrey comes into contact with a mysterious symbiotic organism that allows her to traverse dangerous alien environments. As she discovers new abilities for the symbiote, she gets deeper into hostile territory. The symbiote itself has unclear motivations. Will it ultimately prove a danger to its host or has it grown fond of the young girl? You’ll have to play the game to find out and I highly recommend you do.

I spoke with the creator, Jason Perry, to learn more about the game.

First off, congratulations on the third place finish! How did you feel when you saw the results?

Genuinely surprised! I thought that I was going to win a best-in-genre award, so overall third prize was super exciting.

You’ve been involved in the indie game world since before it was even called “indie gaming.” Are there lessons from your past projects that helped you pull off a game like Symbiote?

I can’t point to any specific lesson, but the years of experience come in handy for developing a comfortable workflow and learning when and where to cut corners if needed– useful skills for finishing on such a tight deadline. :)

The character design for the protagonist is very unique. What appealed to you about a young child being given such formidable skills?

Young protagonists always appeal to me, because that perspective helps evoke sensations like curiosity and wonder. I like that kids can play my games. But don’t let your guard down: if you’ve beaten the game (and if my rushed dialogue does its job), there’s a realization about the protagonist that’s very dark. I think it’s a fun contrast to the brightness of the art design.

Aubrey uses big, bold colors, and I think that’s important for giving a protagonist an “iconic” look. Her notable trait in this game is the blue-green symbiotic “armor” that covers her entire body, which I knew that I needed early on– because it’s the base of the gameplay mechanics and the story. Ultimately, the deadline again played a role: I settled on a design that wouldn’t take me too long to draw and animate.

I was particularly impressed by how fluid the lead character’s animation is. How much time did that take to get right relative to the overall production time?

Thanks! The player character’s animations are very important to me, and I think that good animations can make or break the way a game feels. I used a combination of puppet animation and hand-drawn animation. I actually wrote an article about Symbiote’s animation process here.

Do you see this game as eventually being longer, with more abilities and places to explore? Or are you satisfied with its current length?

Of course the game needs to be bigger! When I was first writing out my ideas, I tried to keep the scope small because of the contest’s deadline. And I STILL had to cut out entire upgrades and areas. Not to mention the boss fights. I have enough plans for mechanics and areas that Symbiote could be much, much bigger than it currently is.

Is there additional lore about this world and characters that didn’t make it into the game? If so, can you give us a sample?

There’s a lot that didn’t make it. And that stuff left holes that I plugged with other new stuff. The original plan was to use the lore to really get into the minds and backstories of all the crew members. Some of that is still there, but the relationships were planned to be a lot deeper.

As fun as it is to think of stories and characters, in a game contest with a tight deadline – story has to be an afterthought. Even though the story was an intricate web in my mind, I wrote all the dialogue/lore in the last day and a half, so a bunch of it is forced and the pacing is a little awkward.

Indie platformers have been huge for the last couple of years. Are there any in particular that inspired you?

I recently played Rayman Legends and Origins, and Guacamelee too, and I think that their influence shows pretty clearly, especially towards the end of the game. And of course it’s impossible to not drop a reference to Super Metroid, so there’s that too. :) 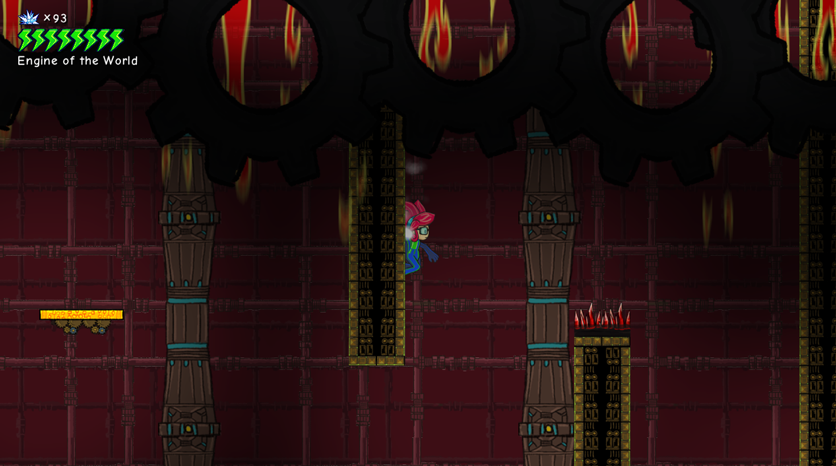 Unlike many similar games, combat plays a pretty small role in Symbiote. Was this intentional from the start or brought on by the contest’s time frame?

I always wanted to focus on platforming moreso than combat. I like to treat enemies within the context of being a platforming obstacle– instead of throwing fights into a level, I try to position enemies to add challenge to the flow of an area. So enemies were always planned to die in one hit rather than require extended battles. But I had planned for different types of enemies(chasers, shooters, thwomps, etc) that I didn’t have time to create. Bosses had to be cut for time too, which is really unfortunate. The only “boss” that made it into the game was a lazy one: it’s just a bunch of regular bad guys in a swarm. :P

You were able to put in controller support for this game, which proved essential. Was this a tough undertaking or just a slight increase in work?

I planned for controller support from the beginning, so it wasn’t really difficult in any way. The hard part is knowing that some people tried to play it with a keyboard!

Were you able to play any other games during the judging period? If so, which ones stood out to you?

I wanted to play them, but I just couldn’t make the time. As soon as I finished working on Symbiote, I got right to work on Time Fantasy: Monsters. So get hyped for that. Gotta use the opportunity to plug my next asset pack! :)

Do you know what your next project will be?

This is a mean question– I have too many projects going on!

Of note: I’m the art director on a monster-catching RPG, and I’m already working on my next platformer using what I’ve learned from making Symbiote. And of course Time Fantasy is an ongoing project with no end in sight. Plenty of fun stuff in the future from me!

Previous post: A Conversation with the Creators of Nanuleu, the IGMC Second Place Winner